I’ve been wanting to go to an ugly sweater party for the longest time! I was determined to make an ugly sweater for some Christmas gathering. There was a Christmas party at my church and I told myself that I’d make an ugly sweater even though there was no dress code. So I bought some fabric, sequence, and some holiday stickers from Walmart and Michael’s. I also used some small ornaments from my Christmas tree. I think I spent a little less than $12 on my sweater which included the sweater itself ($5) and the decor. I had to make myself a budget for the sweater just because it was going to be ugly and because it was going to be a one time kind of a thing.

Ugly Sweater Party #1
The day after I bought my ugly sweater materials, I found out that my church was having an ugly sweater competition! It was perfect timing! I’ve never worked so hard a project that I wasn’t going to be graded on! I didn’t even procrastinate on this! So a lot of love and time was put on my sweater. Though a good amount of time was spent on my couture sweater, it was really fun putting it together when it came down to it.

So I wasn’t the only one wearing a homemade ugly sweater. A few competitors/friends made their own too! Who do you think won? Drum roll. The one on the right at the end. Michelle! Her sweater was definitely ugly!

Ugly Sweater Party #2
My company was encouraging all employees to wear holiday sweaters and anything festive for our annual holiday party. Once I found out that it was ok to wear “holiday sweaters”, I immediately knew I was going to wear an ugly sweater. This time, I switched it up a little. I made my sweater cugly aka cute ugly. A lot of my coworkers were impressed with my sweater. They all liked it but I’m not sure if that meant they liked it because it was more ugly than cute or the other way around. Either way I took it as a positive comment! 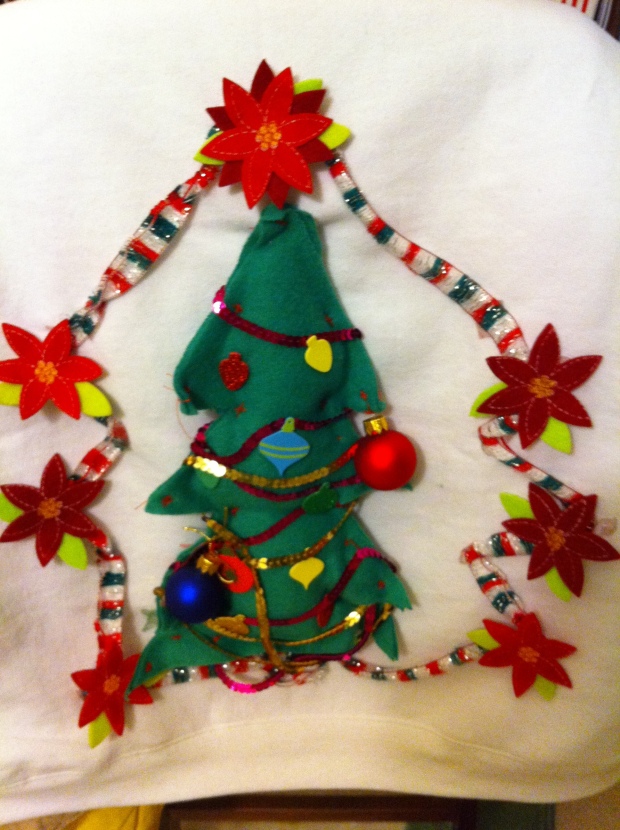 The cool thing about our holiday party was that there was a photo booth! So my coworkers and I took one! I had to put a Christmas tree hat on just to match with my ugly sweater even though you can’t see the tree!

Ugly Sweater Party #3
My last ugly sweater party was a girls only gathering! Before going over to the party, I had to buy some salad since it was potluck. I went to Ralphs with my ugly sweater on. People started looking at me intently. Well, they kept looking at my sweater. I was getting really uncomfortable so I ended up zipping up my jacket. I’ve never felt so self conscious before! It was a little humorous though. At the grocery store, a kid complimented out loud about my headband with the big bow. So that was nice but I was still self conscious about the ugly sweater. Anyways. At the party, two people, including myself, were the only ones who wore our ugly sweater. I kept my sweater still cugly. 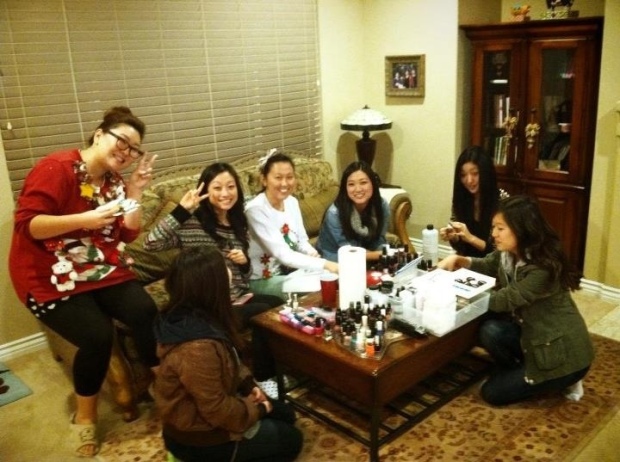 Knowing that I was able to wear my ugly sweater three times made the craft work worth it! I can’t wait to make another ugly sweater next year!