Who knew that a professional symphony would be playing video game music live at a concert? Who really knew? Actually, Ben knew! I went to Video Games Live with him, Matt, and William who are into video games but of course the music itself. We watched the Pacific Symphony play some old school and latest video game music. 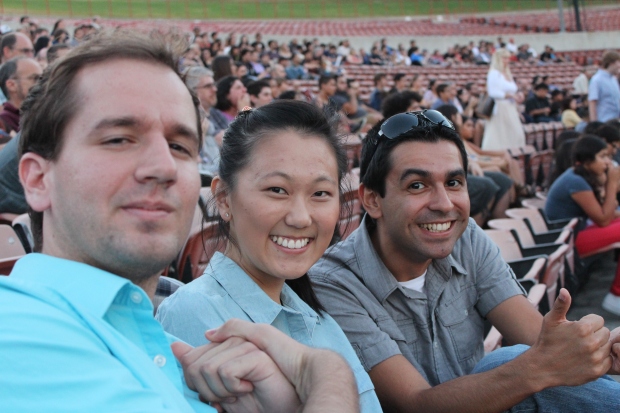 The crowd was not your ordinary crowd. We were surrounded by people who dressed up as video game characters like Super Mario. There were definitely some people who went full out. I was too scared to look at them especially the girl sitting next to us…I can’t tell you how this girl looked like exactly but her face was painted.

Aside from the cosplay, the concert was entertaining with bright lights flashing around the stage and video game scenes being played in the background. The production of the concert was really a lot more than I expected. If you don’t like video games, it’s all good because the music will just sound like contemporary classical music. If you don’t care much about the music, then you’ll just feel like you’re living in the video games while you’re there. Altogether the music, lights, and the visual display brought a magical experience for the audience. Yes, I said it. Magical. It was magical like in the video below.

The concert was pretty engaging with the audience. They had a few people play some games up on stage like Space Invaders with live music, of course!

It was cool to see people from Blizzard come up on stage to talk about how they put their music together. I never realized how much talent it took to compose music for video games until this concert! When you see the musicians, composers, and the visuals of these different games, you find a greater appreciation for the games and the music!

Thanks Ben for inviting me, Matt and William to Video Games Live! That was definitely a new kind of experience for me! Ok, let’s play some Yoshi’s Island and SC2 and WOW now!