There’s a YouTube music video called 626 by the Fung Brothers and they show you places to hang out in 626 aka SGV aka San Gabriel Valley. After I saw the video awhile ago, I always wanted to check out 626 but never got the chance to hit up the hot spots there. But. Luckily. I recently got the chance to go and really live out the music video! The Fung Brothers sing: “So what if we eat late. That’s how it’s suppose to be.” Surely, we did what the Fung Brothers said. We ate late. And guess what? That’s how it’s suppose to be. So it’s ok. I think we ate around 8:30PM at Sunday Bistro. It’s a Chinese restaurant known for their 300+ items on their menu of fusion food.

The plates were huge! So the five of us shared three plates of Indonesian fried rice, noodles, and filet mignon. Family style. I really liked the Indonesian fried rice because it was a tad bit spicy. It had this Asian homey taste. I don’t think you could ever go wrong with any kind of fried rice though. We also had some noodles which were like pansit noodles because they were thin and had a light taste to it. The noodles are deep fried for a second, so the edges of the noodles are crispy. Majority of the noodles are soft because of the sauce. There were some seafood on top of the noodles. I had a piece of squid and was not a big fan of it. Well, I’m not a big fan of seafood in general. Hence the dislike. Then we had the filet mignon which was surprisingly good. It was juicy and cooked really well. Really well as in they did a really  good job at cooking it. For three plates to feed five people for the cost of about $40 was all worth it.

Looks small on the outside but really spacious inside. 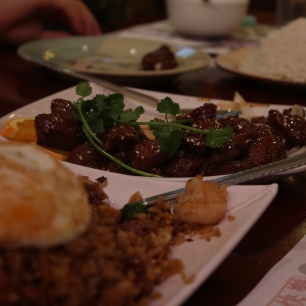 Fancy filet-mignon for less than $15. 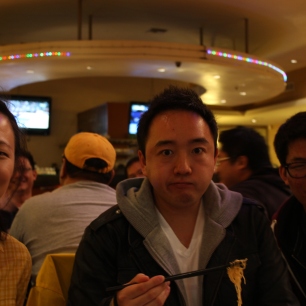 Though it was pretty late when we finished dinner, we had to get some boba in SGV. You can’t go to SGV without getting some boba at Factory Tea Bar. Three things I need to mention about Factory Tea Bar. One. It’s where Wong Fu shot “When It Counts”. If you don’t know the video, just YouTube it. It’s a cute-cheesy hip-hop dance series with some well known dancers in it. Two. Factory Tea Bar was poppin’! A lot of people were there and it looked like a fun place to hang out. Three. Irvine needs a place like that where people can hang out in a spacious place and have some good drinks and sweets. If I were to own such a place, I’d have a mix of Factory Tea Bar and Starbucks/Coffee Bean. 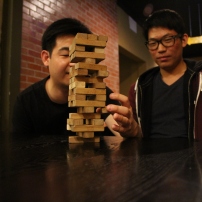 FTB was pretty packed, so we had to wait probably for 10-15 minutes to get seated. I got the iced Honey Milk Green Tea. And I must say, it was good! That was actually my first time ever getting some kind of milk tea at a boba place. I’m glad my first milk tea boba experience was at FTB! They only have one size for their drinks for a little less than $4. It’s like the size of a venti at Starbucks. So it’s more than enough for one person. While we were sipping on our boba, we played Spoons and Jenga. We didn’t have all the blocks for Jenga but somehow the game was really intense and challenging. I ended up being the one to topple all the blocks..Fail! Next time, next time. GG, friends. GG.

After a long night at SGV, we had to head back to OC. Thank you Stanley for driving us to SGV! Thanks to the natives, Stanley and Albert,  for being hospitable in 626. Thank you SGV for being fun and different from Orange County.

I should have made a music video like the Fung Brothers while I was in SGV. Next time, next time. I have to work on my krumping moves first.

It only took me half a year to post these pictures. Camp Banff video is coming soon in 2020. Thanks for the fun summer memories friends! Onto the next adventure!
He sacrificed his nap time to decide his future career. At such a young age of one, he decided he will become a doctor. You made the whole family proud. Happy birthday Korean Baby Prince Brian!
Loved and enjoyed every moment of today. ❤️ Missing: @kiml758 @jojopotatojo @dagampat @nathan.ic
UMMM... This just happened today. Fan girl moment. I saw @lex_ishimoto. Winner of SYTYCD Season 14. He is one of my favorite dancers. He takes dance to another level with his artistry and athleticism. Note: I almost went to Peet’s but good thing I went to Cha For Tea and saw him there. Close call. ❤️