Incheon Airport is so clean and quiet. I wanted to just hang out there because it was so nice but I was ready to explore Korea! 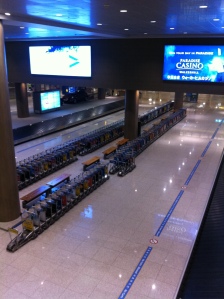 On our way out, we saw our first glimpse of Korea, Paris Baguette aka Pah-lee bah-get aka the most popular Korean bakery. You see Paris Baguette in Korea as much as you see Starbucks in the states. That’s how popular it is there. There’s a few in SoCal. 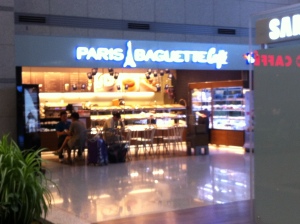 My uncle drove about an hour to pick us up from the airport. Somehow five luggage and several carry-on bags were able to fit in his sedan. Luckily in Korea, being squeezed in the car with suitcases and no seat-belt on is pretty much legal. Finally getting out of the airport, smelling Korea and breathing Korean air was like freedom. The light humid weather was what I expected it to be like when I arrived. Driving on the freeway to my grandma’s house was fun. That was when the sight seeing finally began. Seeing and comparing Korea’s and the states’ billboards, freeways, just everything else was all exciting.

When we got to our grandma’s, we quickly unloaded our luggage to give them all our American gifts. They were all excited about their new clothes, chocolate,  and all the American products you can imagine that we gave them. They loved it all!

One of the best moments of our arrival to our grandma’s was seeing my new cousin, Soon-oh. He was adopted when he was born and seeing him finally in person instead of through Skype was just a blessing. He had fun lying on one of our suitcases and getting stuck there. I think he wanted to sleep on top of the suitcase.

Look at his rosy and chubby cheeks! He was filled with a lot of energy for an 18 month old baby that night. He definitely had a lot of fun with that suitcase. 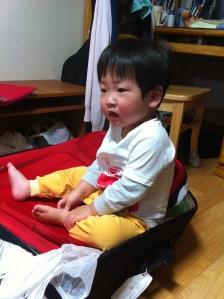 We continued to play with Soon-oh for the rest of the night. Afterwards, we showered Korean style as in not shower in a  bathtub. In Korea, there’s a hose that is usually attached to the sink or against a wall and there’s a drainer in the middle of the bathroom. In other words, you shower in a bathroom without a bathtub.

That night was officially the beginning of my experience in Korea!